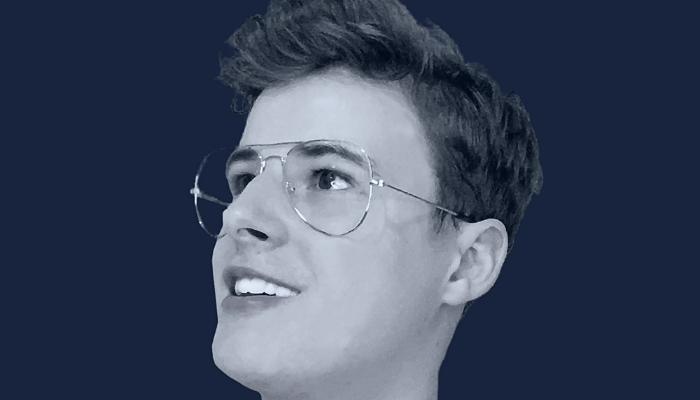 After the past year that we’ve been through, we could all use an extra dose of fun in our lives. Brisbane, Australia’s ethanplus has been delivering that raw uncut with every release. From the vibrant artwork to the cartoonish sounds, and the wild sampling, you’d think his music was silly if it didn’t slap so hard. To be honest, some of his music is silly, his last EP was titled Get Goofy! after all. While it’s often absurd, don’t think for a second it’s not exceptional. ethan’s catalog of bangers is no joke, from early standouts like ‘2charged,’ to the slap-bass heater that is ‘Shake!’ and stellar collabs with Mike Snatchers & vincebyvince, the producer does not miss. And we aren’t the only ones taking note. The rising star recently dropped a single on Great Dane’s ADBC records and won one of Baauer’s beat battles with special guest judge Kenny Beats. When you have FUXWITHIT and legendary artists co-signing you, what can’t you do?

Showing exactly what he’s capable of, ethanplus delivers a scorching, bouncy and fun-filled 30-minute guest mix that’ll have you twerking, mean-mugging and smiling all the way through. We also caught up with ethan for an interview to discuss his musical background, having fun with his music, the influence of TV on his work, what’s next and more.

Tell us about the mix, what’s this the soundtrack to?

It’s the soundtrack to me! Haha, I guess if you were to make a movie about everything that I try to embody in my artistry, this would be the soundtrack. It’s fun, fast, bold, diverse and colourful. Got an ID of mine and a few unreleased flips from me in there too!

Can you tell us a little bit about your musical background. How did you get into music? When did you start producing?

I think my story is very similar to that of many other producers.

When I was about 10 I started playing the electric guitar and found myself being really into intense guitar music such as metal and experimental rock by artists such Joe Satriani and Steve Vai (the latter of which still inspires me to this day).

I was very passionate about guitar music but pretty much despised electronic music until one day when I was 12 or 13 I heard Skrillex’s Scary Monsters and Nice Sprites for the first time and was instantly blown away. It bridged the gap for me. I never realised how energetic and intense you could be with this sort of music. I remember that same night I was already Googling how to make this stuff, and I ended up with a copy of FL Studio within the next few weeks. The rest is history!

Something about the extreme effort that goes into having such a saturated, loud and energetic presentation fascinates me as it’s so far removed from ‘everyday life’ that it begins to feel like some sort of surreal art project.

Your music often packs a cartoon-like energy. Are there any cartoons that helped shape who you are?

Haha I definitely do look to cartoons for inspiration but I think it also goes beyond that into children’s TV in general and also classic sitcoms. Something about the extreme effort that goes into having such a saturated, loud and energetic presentation fascinates me as it’s so far removed from ‘everyday life’ that it begins to feel like some sort of surreal art project.

I don’t really have any specific titles that shaped me per se, it’s more the massive media soup that someone like myself absorbs while growing up in that sweet spot where both traditional TV AND the early days of YouTube were major sources of entertainment and cultural learning. So Daria, Teletubbies, Seinfeld, The Simpsons, Power Rangers, Funniest Home Videos and Rugrats to name some.

Your sample game is nothing short of wild. What’s your favourite sample or sound you’ve ever included in a track?

Thank you! I think there are a lot of cool ones in ‘Wowzers!’ like the burp and the random horn squeaks. But the one I’m probably most proud of is probably the harmonica in ‘Wildwildwomp.’ Everything about that track should be a disaster in theory – it just shouldn’t work. Yet I have received nothing but good feedback from it. I think that’s really cool, makes me feel like I did the impossible haha.

I think something can be fun and funny while not necessarily sarcastic or invalid at the same time. I want to tiptoe the line between ‘superficial’ and ‘substantive’ because I think that line is a lot more blurred than people realise.

From song titles like ‘ZONKERS!’ And ‘Wowzers!’ to the overall audio aesthetic, the feeling of fun seems to permeate through everything you do. How important is having fun with your music?

I know this might seem like a simple question that requires a simple answer but I could talk for literal days about this, so buckle up haha! (I’ll try and be as to-the-point as I can).

As I mentioned earlier about the cartoons and stuff like that, I am very fascinated by “hyperactive” media – the incredible ‘fun’ intensity you feel from product advertisements, junk food packaging, children’s TV, sitcoms, motivational speakers, old aerobics videos etc.

A lot of this stuff was a lot more popular in the past because nowadays we tend to look at it with a very cynical, sarcastic attitude and I think that’s because it makes us feel ‘tricked’ or like they’re trying to bait us with this bright, happy image in order to sell us products, services or ideas that may be ‘superficial’ or don’t align with ‘reality’. To me, this has resulted in the rise in popularity of more muted, minimalist branding aesthetics in recent times. It’s like a desperate plea to say “We’re not a capitalist organisation! We’re not blindly optimistic! We’re down-to-earth just like you!” when really in a lot of cases I feel like this is even more dishonest.

I think my work is similar to creatives like Andy Warhol and SOPHIE in that I believe this intense, pop aesthetic can exist honestly and unapologetically in both high and low culture. I think something can be fun and funny while not necessarily sarcastic or invalid at the same time. I want to tiptoe the line between ‘superficial’ and ‘substantive’ because I think that line is a lot more blurred than people realise.

I also just want to generally encourage people to have fun in their lives. The playful kind, not just the using-substances-and-acting-crazy-with-strangers fun. I think as we grow into adults we are pressured into being these super-serious, colourless beings. We lose everything we immersed ourselves in as children. I want to remind people that there’s literally nothing stopping them from playing with toys or doing finger painting or relaxing in a ball pit while still having a job, paying your taxes and starting a family. It’s this fun vs serious mentality that led me to want to make hard-hitting hip hop and EDM beats that also sound like they were made by a clown.

What do you enjoy doing most outside of music?

I am definitely a pretty big film buff! I also am a design student so I love playing around with making images for my own branding, other people’s branding and just for fun. Also I’m very into retro video games.

What was your reaction when you found out you won Baauer’s Beat battle? What impact has the win had on you?

That was so crazy! Especially since the guest judge was Kenny Beats, who also has his own beat battle…I like to joke that I won ‘both battles’ at the same time…

As ecstatic as I was at the win, a lot of the impact had already happened beforehand. I had entered almost every time for the past few months and through that have had a lot of new people discover me, and I’ve made friends with many of them as they also make cool music. Baauer himself reacted strongly to all my submissions and even gave a shoutout on one of his streams to me and Mike Snatchers’ track ‘Everybody!’ when it dropped. He does a lot for the up-and-coming community. Him and Kenny and many others.

It’s definitely going to be bigger, bolder, and goofier than the last!

What should we expect from you for the rest of 2021?

I’ve been blessed with so many opportunities over the past few months of doing this project, and I’m always in talks with cool people about doing cool new stuff! I don’t want to announce anything in particular since stuff doesn’t always pan out, but definitely watch this space!

But I can say that I’ve been working on lots of flips lately, and I’m keen to put out Volume 2 of ethanplus Versions sometime soon. It’s definitely going to be bigger, bolder, and goofier than the last! I’ve put some of the flips in this mix too!

Just wanted to shout out to everyone who has supported me over these past few months! I am still in the early days of this project but I’ve already achieved more than I ever expected and that is so so great.

Special shoutout to you people at FUXWITHIT for supporting me for so long too, and thank you so much for having me do this mix and interview!