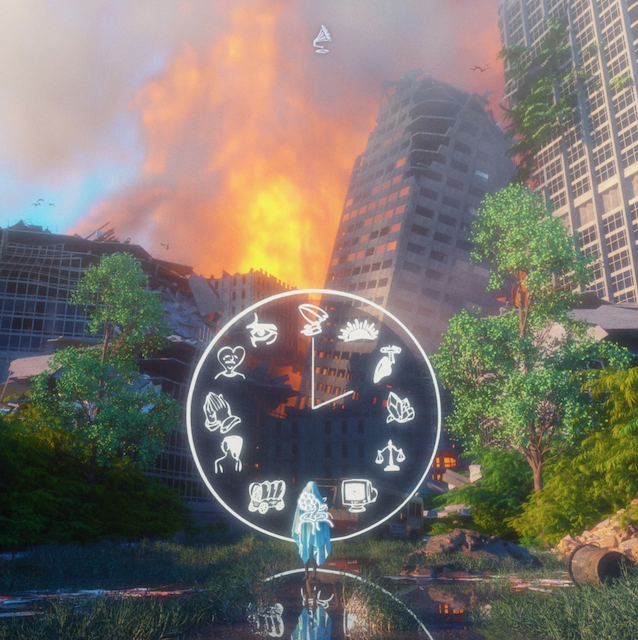 The time is finally here. Next to Blue‘s debut album, Apollyon is officially out now via Good Society. This is a major mark and step for this musician. From jumping through hoops, to learning new skills, Next to Blue is ready to show the world who he truly is. If you haven’t checked out his past work leading up to this moment, then make sure to go back and educate yourself to get a beautiful experience of his journey. His art consists of nothing but airy leads, dreamy melodies and heart wrenching songwriting all together. His experimental ways of soaring through the listener’s inner soul is breathtaking. Knowing how to use every second to his advantage to create brand new sounds and atmospheres. And now one of his biggest projects to date is here to shed more positive energy on the industry.

I guess Apollyon wasn’t really a thing until Josh from Good Society came along and presented the idea.  However, looking back, the reason this came about was a culmination of getting out of a bad professional relationship with an old project (Tank Parade) and trying to recreate the original spark of why I make music in the first place.

I was down bad for a long time after I moved to LA, so I decided to just kind of abandon my conventional process of creating music to try and support myself and instead go back to making music that made me feel complete. I kind of left the internet for a while to do this and it worked.  I technically started this project around 3 years ago and the tracks just kind of piled up and all the sudden I had some sort of complete painting if you will.  Many of these tracks were tossed around to many industry ears over the years and nothing really caught my motivation until Good Society became really invested in what I was creating, that felt good, now we are here dropping Apollyon.

As far as inspiration goes, I was channeling a lot of the feelings of my initial music trajectory being squashed in LA and based my music on things and experiences that helped me crawl back to where I am today.  One example. ‘Seraphite,’ with Ellzo, was a result of playing Last of Us 2 so many times and really resonating with the arc of the characters Abby, Lev, and Yara.  They reclaimed their humanity and I felt like I was reclaiming my agency as an artist.  I tried to replicate a lot of classic synth styles and sounds and mash them against a wall of modern musical styles.  Lots of analog saw plucks and bare chords from simple soundwaves.

I hope this album helps someone the way it helped me. Thanks for listening.
-Next to Blue

Apollyon is a cathartic journey through one’s emotions and mental space. Each track is its own living spirit. Traveling through a realm with many discoveries. Waiting to be praised. Everything Next to Blue has incorporated from past and present tracks returns to find a new home. While making new friends with new personalities from his creative mind. The evolution and maturity through his journey is clearly shown and heard with each note being played. Nurturing the listener’s mentality with every frequency and tone. No song feels out of place and really tells a story overall. From a peaceful driven masterpiece called ‘Angel Lung,’ to ‘Summer Blood’ consisting of heavy drums and an impactful bass line. There areso many exciting characteristics driving this album into new territories. Trust us when we say this project will be on repeat for a long time. Lasting throughout the ages.

Next to Blue has practiced and studied this background for a long time. And to see his vision blossoming into a magnificent scenery is inspiring to the core. Make sure to support Next to Blue by streaming his debut album Apollyon everywhere!